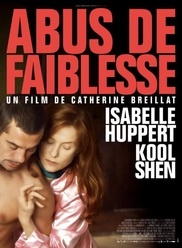 A delightful surprise to see Catherine Breillat at the MIFF screening of her latest film, despite her physical limitations, coming all the way to Melbourne to promote it.

Abuse of Weakness is based on the true story of what happened to Ms Breillat when she suffered a stroke some years ago and her relationship with real life crook Christophe Ronancourt.

After spending a great deal of time in a rehab facility and learning to adjust to her changed physicality, film maker Maud (Isabelle Huppert) lives dependent on others for everyday tasks.  One night, she spots an interesting "type" whilst watching TV that she wants to cast in her next film.  This guy turns out to be notorious con man Vilko, who makes his living bleeding his victims dry before moving on to the next mark.  Maud knows all about Vilko and his past, but seems not to be concerned for herself.  She isn't fooled by his charm, but somehow she submits to his manipulation and increasingly ridiculous requests.  Perhaps, in her vulnerability, she becomes emotionally dependent on Vilko so she complies to his demands, or perhaps the stroke has affected her brain and her judgement is impaired - we don't know.

Isabelle Huppert is outstanding in this movie.  She is a very brave actress and she perfectly portrays the vulnerable but independent Maud, who falls under the control of the sinister Vilko.  Kool Shen as Vilko is a menacing presence on the screen, and one gets the feeling that violence is ever present in this man.

Breillat's movies usually involve sex, sexual power, control and inequality in relationships.  This movie's autobiographical nature provides the viewer with an insight into the control exerted over her by an unscrupulous man while the people around her are left with the unanswerable question - how did this happen to an intelligent woman?
​
3.5 stars 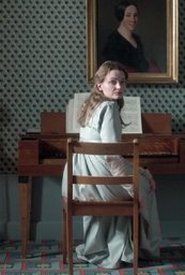 Set in Berlin in 1811, the Romantic Era of the poetry of Goethe, the music of Beethoven and Brahms, this film tells the story of two foolish people, 2nd rate poet Heinrich and the middle-class wife of a businessman, Henriette.  Heinrich has lofty ideas about death and love and believes that a woman who truly loves him should be happy to join him in death.  Unfortunately for him, the object of his unrequited love, his aristocratic cousin Marie, will not have a bar of it.

Casting about him for someone to fill Marie's shoes, his eye alights on Henriette, who suffers somewhat from hero worship, but comes to regard her idol as having feet of clay upon closer acquaintance.  Henriette rebuffs the poet's insulting advances and offer of a loving death on the grounds that she is happy and loved in her family circle.

Things change when Henriette is "diagnosed" somewhat dubiously as having a terminal disease.  Henriette begins to consider that a quick death in the company of another would be preferable to a slow lingering death.

The pair vacillate in their weak attachment to each other, their decision to die, and their choice of death partner, so much so that one wonders whether these two boobies could organise their way out of a paper bag.  Henriette's bemused and wooden husband and worried little daughter can only watch from the sidelines as fate unfolds.

The gentle humour and absurdities of this story were delightful, and like the mannered and calm waltz depicted in the movie, the characters weave and change and dance about each other, coupling and uncoupling in a polite and well rehearsed drill.
​
3 stars
Powered by