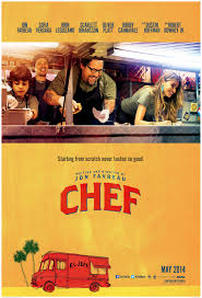 Enjoyable, if predictable, story about chef Carl Casper (Jon Favreau), whose soul has been crushed by working under a controlling LA restaurant owner (Dustin Hoffman) who is too afraid to make changes to his menu.  After cooking and preparing the same safe food for ten years, Carl longs to stretch his wings and cook the daring food he once did in Miami.

When a restaurant critic who knew him in his Miami days slams the predictable menu, Carl goes into meltdown and gets himself un-hired.  What ensues is a great road trip in a beat up food truck with his best mate, his cute son, and the support of his understanding and caring ex-wife, to rediscover his heart, his talent, and his love of food.

There are many enjoyable elements to this film.  The relationship between father and son is realistic and somewhat poignant without being too cute.  Percy longs to have a connection with his father that isn't just fun access visits, but just hanging together and talking and doing normal things.  There is a pivotal aspect to the story that I could totally relate to, in the total bewilderment of Carl with social media.  As he comes to terms with the scarier aspects of smart phones and Twitter, it becomes an instrument of reconciliation between father and son.

The cast is excellent with some big names in supporting roles (Scarlett Johansson, Dustin Hoffman, Robert Downey Jnr, Oliver Platt), and the chemistry between former husband and wife, Jon Favreau and the very sexy Sofia Vergara, is believable and strong.
Also worthy of mention is the the wonderful cubano music that pulses throughout the movie and certainly gets the toes tapping!
​
3.5 stars
Powered by