​Something to think about: thanks to Bass Coast Fine Film Group and the Wonthaggi Cinema 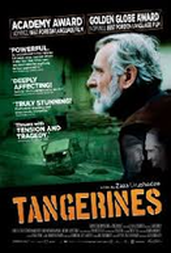 On Sunday 19th July, whilst Team Australia and the Anti Racism Rally were  gathering to express hatred and counter sentiments of the “other,” I went to the Wonthaggi Cinema to see Tangerines.

Film critic Dennis Harvey describes Georgian writer-director Zara Urushadze’s film as poignant and accessible which it is. But to classify it as a “seriocomic drama” is to trivialize its message.

Its has humour, a dry, intelligent wit but there is no intent to bring it to the door of facetious comedy. Harvey’s summary of the narrative is informative but misses the most important aspect: its humanity and the plight of minorities.

Although the Estonian refugees settled the village 100 years before the dissolution of the USSR raised ethnic tension, they have returned to Estonia.

Ivo, a grandfather, remains behind, making fruit boxes for his neighbour’s crop of Tangerines. Margus is desperate for help to pick his fruit, not because of the threat to lost income but so not to waste such a wonderful bounty. He waits for a promised team from a nearby military camp.

When a skirmish between opposing forces results in death and injury, Ivo, with the help of Margus, brings a Chechen and a Georgian into his house. They are treated by the village doctor, who, about to follow his family to Estonia, gives Ivo the medicines  necessary for their recovery. Then two men bury the dead and hide the vehicles to prevent discovery.

It is Ivo’s calm determination for respect that gradually overcomes the soldiers’  antagonism toward each other during their recovery. His simple life of basic needs and his concern for his fellow humans of whatever persuasion underpins the story.
Wars happen. They are feed by rhetoric that fires the fear of the “other”, the unknown.

Sunday was an ironic day for me. I wish those people who seem determined to fuel friction within the rich diversity of multi-cultural Australia could have spent 87 mins to enter Ivo’s world and learned something about the futility of war.

We all have a commonality: we are human, and our basic needs are shared. Our differences colour our lives if we allow it to happen.
Yesterday’s news about searching for extra-terrestrial life raises a question. If we have some much difficulty in accepting our human differences, what happens  if we receive an answer to our signals? 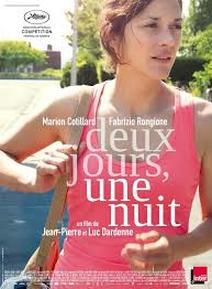 Sandra (Marion Cotillard) has been made redundant after a vote by her fellow factory workers for either a 1,000 euro bonus or her job.  The workers have had the wind put up them by their supervisor, Jean-Marc, who appears to have told some of them that if they don't vote to lose Sandra, one of them will be next.  After the owner of the factory agrees to hold another secret ballot, Sandra is given a second chance.  Told over a period of a weekend, Sandra, who has been on sick leave with depression, struggles to meet with all her colleagues to ask them to give her a chance and vote for her to keep her job.

The Dardenne brothers present us with a depiction of the expendability of unskilled workers in the modern manufacturing world.  Sandra and all her co-workers have very good reasons for wanting to keep their jobs and accept the large bonus.  Most of them are struggling to make ends meet with family commitments and cost of living issues, and after each encounter with a colleague, it seems as if Sandra is fighting a losing battle.  There is also the undercurrent of the likable Sandra being persecuted by the foreman, Jean-Marc, who seems to be going out of his way to sabotage her chances of keeping her job, for unspecified reasons.  It is never explained why Sandra has suffered from depression, but reading between the lines, the brutish Jean-Marc probably had something to do with it.

Sandra and her co-workers run the gamut of human emotions in all of the situations she has to deal with, and if some of the outcomes are predictable, that doesn't take away from a simple story told well.

As with their previous film, The Kid With A Bike, the Dardenne brothers end this bleak story on an optimistic note.  Marion Cotillard is brilliant as Sandra, and the supporting cast performances are also outstanding.
​
4 stars
Powered by