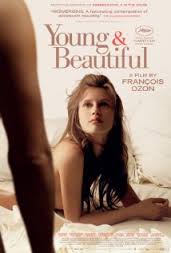 I confess I am a huge admirer of the work of director Francois Ozon, and his ability to unsettle and perplex the viewer is often an essential element of his films.  This one is no different.  The story follows teenager Isabelle, who for reasons never explained, becomes a call-girl.

Isabelle has a favourite client in the avuncular Georges, who treats her with respect and is obviously taken with her.  When Georges unexpectedly dies "in the act", Isabelle's secret life is uncovered by the Police and revealed to her family.

There are undertones of family tension in the story in an absent biological father, a stepfather who is relaxed in his attitudes to his wife's kids, and a mother who wants to be involved but is kept at arms length by her offspring.  I did find this film very disturbing, and perhaps more so because there is no articulation given to the choices Isabelle makes.  Her life seems perfectly normal, with no overt social or emotional reason for her to go into prostitution, and one is left with the impression that she will revert to that lifestyle at the first opportunity.

Charlotte Rampling makes a brief, if wonderful, appearance as the widow of Georges, curious to meet the girl who met regularly with her husband.  I could watch Charlotte Rampling cook toast and be quite content!
​
3.5 stars
Powered by