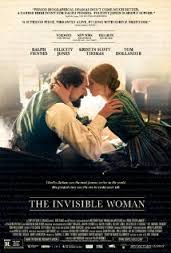 Interesting, if a little unengaging, depiction of the affair between acclaimed author and personality, 45yo Charles Dickens (Ralph Fiennes), and 2nd rate actress 18yo Ellen (Nelly) Ternon (Felicity Jones), told from Nelly's perspective.

We meet Nelly some time after Dickens' death.  She is now married to a schoolmaster and they run a school together in Margate.  Nelly is in emotional turmoil.  She has been unable to get past the death of the great man and is keeping secrets from her husband and their friends.  Her disquiet is manifested in emotional distance from her husband and their current life, and expressed through vigorous stalking of the wintry beach near their home.

Through a series of flashbacks we learn of the meeting of Dickens and Nelly, the precarious social position of Nelly's family, and the minefield of morals that she faces with the prospect of becoming the mistress of a man whose every move is noted and commented on.  The humiliation and loss of dignity suffered by Dickens' wife, Catherine, and her sadness at being replaced by the younger and more attractive woman is brilliantly understated as portrayed by Joanna Scanlan.

However, as much as I liked this movie and the story, I found Felicity Jones as Nelly to be a bit of a pretty doll.  In real life, Ellen Ternon is described as having been intelligent, literary, and captivating. In photos, she is a dark haired, sharp featured, attractive woman with a very intelligent face. This Nelly appears as none of those things.  Although she does have a heartfelt appreciation for Dickens' work, she is a soft pretty blonde who seems to be allowing life to sweep her along.

Fiennes is good as Dickens, a man of the world, torn between his desires, his vanity, and his family, as is Joanna Scanlan as Mrs Dickens, a woman past her prime after bearing many children, and with the bitter self knowledge of not meeting her husband's intellectual standards, or his ideal of feminine attractions.  Kirstin Scott-Thomas as Nelly's mother was also good, but the role did not allow her much scope to shine.  This Nelly, however, failed to captivate me, and the lingering intense close ups of the back of her neck and her face, only serve to emphasise that she is a pretty girl suffering from hero worship, but not much else.
​
3 stars
Powered by